Seattle’s newly reimagined Climate Pledge Arena at Seattle Center opened last October as the home to the NHL's Seattle Kraken, and the WNBA Seattle Storm. The 18,000-seat space is also a music venue, with Foo Fighters and Coldplay among its first concerts. As its name implies, the arena is committed to sustainability.

Climate Pledge Arena’s historic and iconic roof was originally designed for the 1962 World’s Fair and declared a landmark in 2017. It was preserved as part of the current redevelopment.

Flyhouse joined the project in late 2020 and the iconic trapezoidal roof played a huge role in our work.

Based on the architect’s concepts, we focused on the balance between beauty and function. We designed, fabricated, and supervised the installation of acoustic baffles. Our goal included the creation of a simple rigging solution allowing the trapezoidal shaped baffle to trim evenly—these details took much finessing to get right. It was worth it: the result is a ceiling that looks finished, unique, and as aesthetic as it is functional.

Climate Pledge By the Numbers:

That’s the equivalent of 20 53’ semi-trailers worth of total materials installed. And we didn’t waste a minute! The crew was onsite just 80 days, with the installation completed within four months. That’s how we fly! 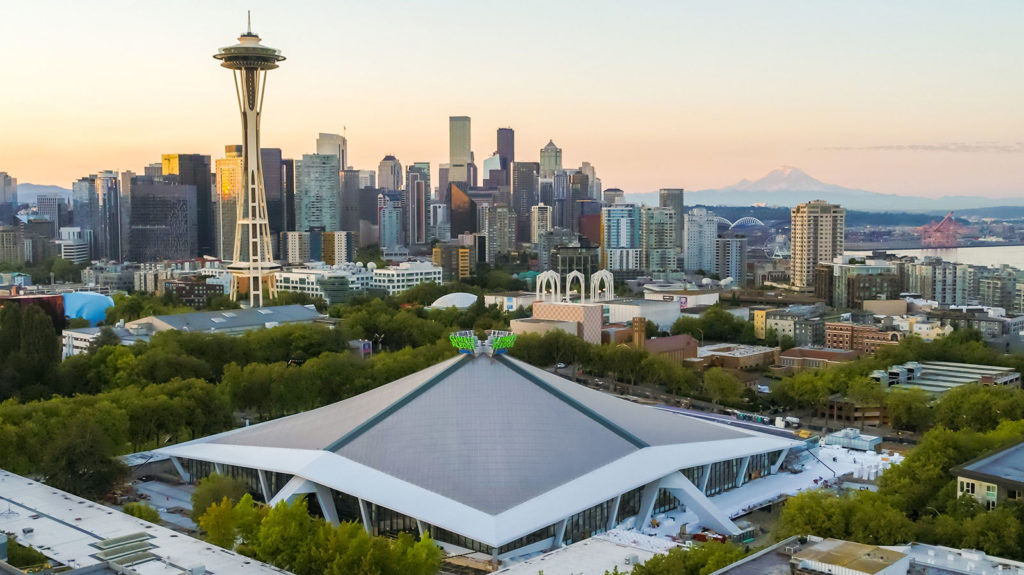